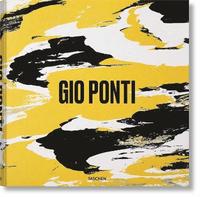 av Salvatore Licitra, Stefano Casciani, Lisa Licitra Ponti, Brian Kish, Fabio Marino
Inbunden Engelska, 2022-04-17
2529
Köp
Spara som favorit
Also available as Art Edition (No. 1-1,000) including an exclusive, square format reproduction of the Arlecchino coffee table and a set of four numbered ocean liner interior prints. To study Gio Ponti's prolific body of work is to appreciate the clear, unifying vision behind a complex creative universe. A synthesis of the arts, his creations expand intuitively with the Italian grandeur and studied lightness that defined his iconic style. Ponti's rare capacity to move seamlessly between scales allowed him to approach the design of a teaspoon with the same conviction as he did an entire city. He was as much an architect and designer as he was a publisher, poet, and man. A treasure in its own regard, his contribution is also a distinctive landmark of Italy's mid-century Renaissance and the modernist values it sought to realize. This new book is the most comprehensive account of Ponti's work to date, unprecedented in scale and scope. It tracks the development of his oeuvre over 6 decades, with 136 projects indexed and reproduced in high resolution, each object framed by the context in which Ponti had created it. Like windows onto his elusive life, unpublished materials and candid imagery create new dialogues between his famous masterpieces and his lesser-known feats. A rich layer of texts, featuring an extensive biographical essay by Stefano Casciani, was produced in close collaboration with the Gio Ponti Archives offering an intimate insight on his life's work. Materializing Ponti's core philosophy of modernity, this book presents architecture as a performing object, a "self-illuminating" stage for his humanistic art de vivre and boundless creativity.
Visa hela texten

"The most resistant element is not wood, is not stone, is not steel, is not glass. The most resistant element in building is art. Let's make something very beautiful." * Gio Ponti * "The book is full of revelations. But for those who know Ponti for his architecture and his furniture, the real surprise is the ways they came together in rooms that display his seemingly endless supply of creativity." * 1stdibs.com * "There's an irony here, that a prince of lightness such as Ponti should be remembered with something so massive, but it's hard to do justice to his output in any other way... It successfully captures Ponti's spirit." * The Observer * "...a tour de force investigation of the designer's oeuvre." * architecturaldigest.com * "...an absolute beauty about the refined Italian architect-designer who defined a vein of elegant, uncontroversial mid-century chic." * The Financial Times * "Gio Ponti aims to be the final say about the designer's work and importance." * architectmagazine.com *

Photographer, artist, and curator Salvatore Licitra created the "Gio Ponti Archives" in the studio of his grandfather Gio Ponti in 1996. Notable curated exhibitions are Gio Ponti Archi-Designer at the Musee des Arts Decoratifs in Paris, in 2018, and Gio Ponti: Loving Architecture at the MAXXI in Rome, in 2019. Stefano Casciani is an Italian writer and designer. The innovative inspiration of his own work has been recognized with awards such as the Compasso d'Oro 2001. Managing Editor of Domus from 2000 to 2011, he has been Editor and Publisher of disegno magazine since 2012. Widely known as a poet and artist, Lisa Licitra Ponti (1922-2019) flanked her father Gio Ponti at Domus, becoming Managing Editor until 1979, while also contributing to Stile. In 1990, she edited the important monograph: Gio Ponti. The Complete Work, 1923-1978. Brian Kish is a 20th-century Italian architecture and design historian, with a focus on BBPR, Caccia Dominioni, Gardella, and Ponti. He curated, in 2001, the first US exhibition on Gio Ponti and wrote for both Entryways of Milan and Gio Ponti Archi-Designer (M.A.D. Paris). Fabio Marino is an architectural historian and researcher at the Polytechnic of Milan. He investigates contemporary architecture and its connection to Italian Design of the 1950s and 1960s. He has coauthored various books on Italian Design. Based in Berlin, freelance editor and art director Karl Kolbitz worked with Mario Testino and Wolfgang Tillmans for many years, before founding his own creative practice focusing on the development and design of publications, such as Entryways of Milan and Gio Ponti.