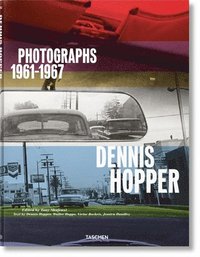 av Victor Bockris, Walter Hopps, Jessica Hundley, Tony Shafrazi
Inbunden Engelska, 2018-02-20
608
Bevaka
Spara som favorit
Tillfälligt slut – klicka "Bevaka" för att få ett mejl så fort boken går att köpa igen.
During the 1960s, Dennis Hopper carried a camera everywhere-on film sets and locations, at parties, in diners, bars and galleries, driving on freeways and walking on political marches. He photographed movie idols, pop stars, writers, artists, girlfriends, and complete strangers. Along the way he captured some of the most intriguing moments of his generation with a keen and intuitive eye. A reluctant icon at the epicenter of that decade's cultural upheaval, Hopper documented the likes of Tina Turner in the studio, Andy Warhol at his first West Coast show, Paul Newman on set, and Martin Luther King during the Civil Rights March from Selma to Montgomery, Alabama. From a selection of photographs compiled by Hopper and gallerist Tony Shafrazi, this extensive volume, finally back in print in a new edition, distills the essence of Hopper's prodigious photographic career. Also included are introductory essays by Shafrazi and legendary West Coast art pioneer Walter Hopps, as well as an extensive biography and new afterword by journalist Jessica Hundley. With excerpts from Victor Bockris's interviews of Hopper's famous subjects, friends, and family, this volume revives an unprecedented exploration of the life and mind of one of America's most fascinating personalities.
Visa hela texten

"...an extensive book that lends insight into his images and subjects." * The New York Times * "It's an extraordinary book, almost paparazzi in its feel, yet way too artistic for that genre." * GQ * "I was doing something that I thought could have some impact someday. In many ways, it's really these photographs that kept me going creatively." * Dennis Hopper *

An Englishman who moved to New York in 1973 and became connected to Andy Warhol, the Factory, and Interview, Victor Bockris has written books on Lou Reed, Andy Warhol, Keith Richards, William S. Burroughs, Patti Smith, and Muhammad Ali. Walter Hopps (1933-2005) was one of the premier curators of 20th-century art. Cofounder of Los Angeles's Ferus Gallery and director of the Pasadena Museum of Art, he was responsible for the first retrospectives of Kurt Schwitters, Joseph Cornell, and Marcel Duchamp. A key advocate of American Pop art, his 1962 survey "New Painting of Common Objects" was the first of its kind. After directing the Washington Gallery of Modern Art, he went on to build the Menil Collection museum in Houston and became its founding director in 1987. Jessica Hundley is an author, filmmaker and journalist. She has written for the likes of Vogue, Rolling Stone, and The New York Times, and has authored books on artists including Dennis Hopper, David Lynch, and Gram Parsons. Hundley often explores the counterculture in her work, with a focus on metaphysics, psychedelia, and magic. Born in Abadan, Iran, to Armenian parents, Tony Shafrazi was educated in England from age 13, graduating from the Royal College of Art in 1967. Moving to New York in 1969, he exhibited as a conceptual artist throughout Europe and New York. From 1974 to 1978, he advised and helped build an outstanding collection for the Museum of Contemporary Art in Tehran. In 1979, he opened his New York gallery, introducing groundbreaking American artists of the 1980s including Haring, Basquiat, Scharf, Brown, and Baechler, while exhibiting masters of the '60s: Warhol, Ruscha, and Hopper. From 1990, he exhibited the work of Brian Clarke, Patrick Demarchelier, Robert Williams, Michael Ray Charles, and David LaChapelle. Since 1997 he has represented the Estate of Francis Bacon, and continues to mount museum-quality exhibitions, most recently the critically acclaimed "Who's Afraid of Jasper Johns?" Dennis Hopper (1936-2010) was an acclaimed artist, actor, screenwriter, and director who first impressed audiences with his performances in Rebel Without A Cause (1955) and Giant (1956). He changed the face of American cinema with Easy Rider (1969), which he cowrote, directed, and starred in. Hopper went on to act in hundreds of memorable films and television shows, including Apocalypse Now (1979), Blue Velvet (1986), Hoosiers (1986), True Romance (1993), Basquiat (1997), Elegy (2008), and the TV series Crash (2008). Hopper began painting as a child and started taking photos in 1961, after his then wife Brooke Hayward gave him a 35 mm Nikon camera for his birthday. His paintings and photography have been exhibited all over the world, including the recent retrospective, "Dennis Hopper and the New Hollywood" in Paris. Dennis Hopper passed away May 29, 2010, in Venice, CA.