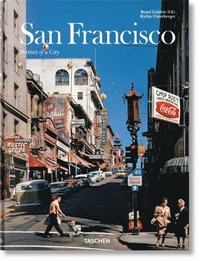 San Francisco. Portrait of a City

av Richie Unterberger, Reuel Golden
Inbunden Engelska, 2022-01-08
561
Köp
Spara som favorit
Starting with an early picture of a gang of badass gold prospectors who put this beautiful Northern California city on the map, this ambitious and immersive photographic history of San Francisco takes a winding tour through the city from the mid-nineteenth century to the present day. Enjoy eye-catching views of the city's most enduring landmarks and symbols: the Golden Gate Bridge, Chinatown, the picturesque trams that wind up and down the famously steep hills, the popular waterfront, its beautiful bay, and its spectacular cityscapes and vistas. San Francisco's counterculture movements that shaped our collective consciousness are also featured prominently: the beats of North Beach, the hippies of Haight-Ashbury, the gay communities of Castro, and the Black Panthers of neighboring Oakland. Some of the city's most famous residents also make appearances: Robin Williams, The Grateful Dead, Angela Davis, Janis Joplin, Sylvester, and Allen Ginsberg, among others. This book features hundreds of newly found images from dozens of archives including museums, universities, libraries, galleries, private collections, and historical societies, from 19th-century daguerreotypes to mid-century Kodachromes to 21st-century digital pictures. Master photographers include, among others: Stephen Shore, Imogen Cunningham, Fred Lyon, Steve Schapiro, Minor White, Dorothea Lange, Albert Watson, Robert Frank, Garry Winogrand, William Claxton, Fred Herzog, Ansel Adams, Jim Marshall, and many local shooters. Also includes introductory essays and captions by Bay Area-based author Richie Unterberger and a "Best of San Francisco" books, music, and movies section and biographies of the photographers. Tony Bennett famously sang, "I left my heart in San Francisco," and this meticulously researched and conceived portrait will equally inspire and make you fall in love with the spirit of the City by the Bay.
Visa hela texten

"San Francisco always has had a warm welcome for human beings from all over the world." * Duke Ellington * "The array of photographers represented covers every celebrated name ever to click a camera in this town." * Fred Lyon * "...likely to make any San Franciscan feel both nostalgic and right at home, all at once." * The San Francisco Standard * "This may be the definitive photo book of San Francisco." * SFgate.com * "[It] reminds everyone who has ever lived in the city by the bay why they are so lucky to call San Francisco home." * SFGate.com * "San Francisco is captured at its lurid best... Every photo in the book brings back jolts of memory." * Business Traveler *

Richie Unterberger is the author of numerous rock history books, including volumes on the Who, Bob Marley, and 1960s folk-rock. A San Francisco Bay resident for 35 years, he has contributed to numerous publications, including MOJO, Record Collector, and The Oxford American. He teaches courses at several Bay Area colleges, including the University of San Francisco, San Francisco State University, and the University of California at Berkeley. Reuel Golden is the former editor of the British Journal of Photography and the Photography editor at TASCHEN. His TASCHEN titles include: Mick Rock: The Rise of David Bowie, both London and New York Portrait of a City books, The Rolling Stones, Her Majesty, Football in the 1970s, the National Geographic editions, the David Bailey SUMO and Andy Warhol. Polaroids.