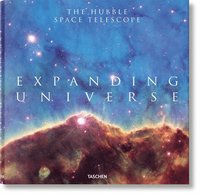 av Charles F Bolden, Jr, Owen Edwards, John Mace Grunsfeld, Zoltan Levay
(1 röst)  |  Läs 1 recension
Inbunden Engelska, 2022-07-19
347
Köp
Spara som favorit
With investigations into everything from black holes to exoplanets, the Hubble Telescope has changed not only the face of astronomy but also our very sense of being in the universe. On the 30th anniversary of its launch into low-earth orbit, this updated edition of Expanding Universe presents 30 brand new images, unveiling more hidden gems from the Hubble's archives. Ultra-high resolution and taken with almost no background light, these pictures have answered some of the most compelling questions of time and space while also revealing new mysteries, like the strange "dark energy" that sees the universe expanding at an ever-accelerating rate. The collection is accompanied by an essay from photography critic Owen Edwards and an interview with Zoltan Levay, who explains how the pictures are composed. Veteran Hubble astronauts Charles F. Bolden, Jr. and John Mace Grunsfeld also offer their insights on Hubble's legacy and future space exploration.
Visa hela texten

"A magnificent selection of pictures taken by cameras on the Hubble Space Telescope... The pictures are processed and displayed with great care, with colors and contrast adjusted to make the scenes as truthful and vivid as possible." * Freeman Dyson *

Owen Edwards has written about photography for more than 30 years for numerous publications including American Photographer, New York Times Magazine, and Smithsonian. John Mace Grunsfeld, PhD, is an astrophysicist and a NASA astronaut. He has flown five times on the Space Shuttle, including three Hubble servicing missions. He has served as the Associate Administrator for the Science Mission Directorate, the NASA Chief Scientist, and as the Deputy Director of the Space Telescope Science Institute. Zoltan Levay is a retired principle science visuals developer at the Space Telescope Science Institute, where he worked with astronomers and communicators worldwide to publicize science results from NASA's Hubble Space Telescope.