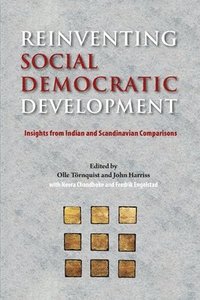 Insights from Indian and Scandinavian Comparisons

av Fredrik Engelstad, Neera Chandhoke, Olle Toernquist, John Harriss
Häftad Engelska, 2017-02-28
359
Köp
Spara som favorit
Finns även som
Visa alla 1 format & utgåvor
In an age where vast global forces are bringing massive change, can social democratic development be reinvented? Drawing on similar concerns to those voiced by Bernie Sanders and Donald Trump in their US presidential primary campaigns, this pioneering book by concerned scholars looks at experiences of social democratic development in Scandinavia and India. By comparing situations both in the North and South, they seek to explore the possibilities for the reinvention of social democracy in an age of uneven development in the South and growing inequality globally.
Visa hela texten

'The authors brilliantly link the experiences of social democracy in the global North (Sweden and Norway) and South (India), pointing to parallels with Latin America and Africa also. ... a pioneering contribution to understanding how mobilisation can achieve serious alternatives to neoliberalism.' - Jeremy Seekings, Professor of Political Studies and Sociology, University of Cape Town; '[N]ot only a bold and original contribution to comparative politics and development but also indispensable reading for those interested in the revitalization of the social democratic project.' - Patrick Heller, Professor of Sociology and International Studies, Brown University; '[S]harpens the global intellectual and political challenge to show if and how a democratic and anti-authoritarian model combining economic and social development is feasible.' - Hakan A. Bengtsson, Executive Director, The Stockholm Arena Group

Olle Tornquist, Professor of Political Science and Development Research, University of Oslo, has written widely on radical politics, development and democratisation. In addition to parts of India, his main empirical focus since the 1970s is Indonesia, where he also co-directs research with scholarly activists. Previously Director of the LSE's Development Studies Institute, John Harriss is Professor of International Studies at Simon Fraser University in Vancouver. He has written extensively on institutions and the politics of development, and on the politics and society of India.