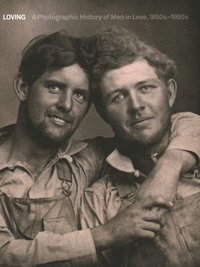 av Hugh Nini, Neal Treadwell
(4 röster)  |  Läs 1 recension
Inbunden Engelska, 2020-10-14
616
Köp
Spara som favorit
Loving: A Photographic History of Men in Love, 1850-1950 portrays the history of romantic love between men in hundreds of moving and tender vernacular photographs taken between the years 1850 and 1950. This visual narrative of astonishing sensitivity brings to light an until-now-unpublished collection of hundreds of snapshots, portraits, and group photos taken in the most varied of contexts, both private and public. Taken when male partnerships were often illegal, the photos here were found at flea markets, in shoe boxes, family archives, old suitcases, and later online and at auctions. The collection now includes photos from all over the world: Australia, Bulgaria, Canada, Croatia, France, Germany, Japan, Greece, Latvia, the United States, the United Kingdom, Russia, and Serbia. The subjects were identified as couples by that unmistakable look in the eyes of two people in love - impossible to manufacture or hide. They were also recognised by body language - evidence as subtle as one hand barely grazing another - and by inscriptions, often coded. Included here are ambrotypes, daguerreotypes, glass negatives, tin types, cabinet cards, photo postcards, photo strips, photomatics, and snapshots - over 100 years of social history and the development of photography. Loving will be produced to the highest standards in illustrated book publishing, The photographs - many fragile from age or handling - have been digitised using a technology derived from that used on surveillance satellites and available in only five places around the world. Paper and other materials are among the best available. And Loving will be manufactured at one of the world's elite printers. Loving, the book, will be up to the measure of its message in every way. In these delight-filled pages, couples in love tell their own story for the first time at a time when joy and hope - indeed human connectivity - are crucial lifelines to our better selves. Universal in reach and overwhelming in impact, Loving speaks to our spirit and resilience, our capacity for bliss, and our longing for the shared truths of love.
Visa hela texten

"Some images, taken under umbrellas, speak to the secret code used in the mid 1800s up until the late 1920s - posing beneath meant the two men were involved with one another." -- Emma tucker - Creative Review; "There is something that transcends time periods, nationalities and social standing: the look of love. And it was these glances and gazes that led couple Hugh Nini and Neal Treadwell to amass a singular photographic trove of men in love that spans 100 years." -- Dusica Sue Malesevic - Daily Mail; "A new book collects photographs of male romance over the course of a century - with many images taken secretively so the lovers didn't get caught." -- Mee-Lai Stone - The Guardian; "They may seem like simple images now, and nothing out of the ordinary, but in fact they show incredible acts of bravery." - Faima Bakar, Metro UK; "The captivating gazes and embracing poses reveal a world entirely different from the one we live in today." -- Liucija Adomaite and Justinas Keturka, Bored Panda; "In a press release to Upworthy, the authors described it as a "visual narrative of astonishing sensitivity"" -- Jisha Joseph, Upworthy; "...a collection of previously unpublished vernacular photography depicting romantic love between men that powerfully and movingly reasserts both that love is love and that we've always been here." -- James Kleinmann, The Queer Review; "Love between men was forbidden, but still some adventurous wanted to perpetuate their relationship: Stunning historical images show the splendor of a man in love." - Laura Airola, Helsingin Sanomat, Finland;

Native Texans, collectors Hugh Nini and Neal Treadwell are arts professional currently living in New York City. Their collection has grown over a period of 20 years to include over 2700 images.