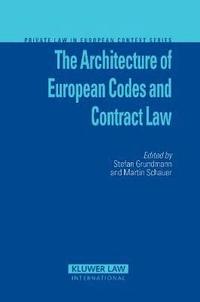 The Architecture of European Codes and Contract Law

av Stefan Grundmann, Martin Schauer
Inbunden Engelska, 2006-10-01
2151
Köp
Spara som favorit
Kan levereras innan julafton!
Finns även som
Visa alla 1 format & utgåvor
The ongoing debate on the harmonisation of European contract law has metamorphosed into an important recognition: that none of the existing national systems of contract law, even the most 'modern,' have been able to keep pace with the extensive and radical changes in the world which contract law must reflect. The nineteen outstanding contributors to this deeply insightful book concur in envisioning a fundamentally new systematic concept of contract law that, while preserving the essential 'architecture' of the existing European codes, would nonetheless find cogent ways to integrate such modern developments as mass transactions, chains and networks of contracts, regulation of markets and contracts to protect consumers, and service and long-term contracts into an optional European code. The book is organised along three major avenues: the systematic arrangement of a contract law code - how it deals with core questions of formation and performance or breach of contract, such as mistake and misrepresentation, standard contract terms, and remedies in the case of breach of contract; the apparent necessity to merge consumer contract law (i.e., such issues as product safety and liability, warranties, and consumer debt and insolvency) with traditional core contract law concepts; and, the importance to substantive contract law of the pre-contractual phase, in which information duties are becoming steadily more paramount. The authors' perspectives cover a wide range of jurisdictions, including new EU Member States. The book's overall commitment to an integration of comparative law, EC law, and the debate on European codification gives it both an authority and an immediacy that offer interested practitioners and academics fertile ground for the development of a new model of contract law that is more than a common denominator of what has been in force so far, a model which might serve as a basis for Europe-wide and perhaps even worldwide discussion.
Visa hela texten