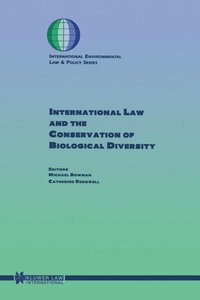 International Law and the Conservation of Biological Diversity E-bok

av Michael Bowman, Catherine Redgwell
E-bok (PDF - DRM), Engelska, 1996-01-01
2949
Ladda ned
Spara som favorit
Laddas ned direkt
Läs i vår app för iPhone och iPad
Finns även som
Visa alla 1 format & utgåvor
This work presents a thorough analysis of the biodiversity concept in international law and commentary on the 1992 United Nations Convention on Biological Diversity, which was opened for signature following the 1992 UN Conference on Environment and Development. This Convention is the first international treaty explicitly to address all aspects of biodiversity ranging from the conservation and sustainable use of biological resources, to access to biotechnology and the safety of activities related to modified living organisms. The work extends beyond the ambit of the Convention itself to examine the conservation of biodiversity in international law generally, including measures for the protection of the terrestrial, marine and Antarctic environment and particular features relating to sustainable use of biological resources, ex-situ conservation and plant genetic resources. It further analyses the controversial issue of intellectual property rights, the problems of implementation in the European Union and the United States, differences between developing and developed states and the role of indigenous peoples. This major new work has been written by members of the Committee on Environmental Law of the British Branch of the International Law Association following an earlier study on the subject of International Law and Global Climate Change (Graham & Trotman, l991). It is the first major study of the Convention, of the context in which it was negotiated, and of the prospects for its implementation, following the entry into force of the Convention on 29 December 1993.
Visa hela texten