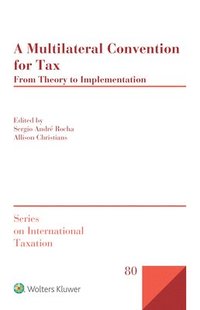 A Multilateral Convention for Tax

From Theory to Implementation

av Sergio Andre Rocha, Allison Christians
Inbunden Engelska, 2021-11-29
2381
Köp
Spara som favorit
Finns även som
Visa alla 2 format & utgåvor
The Multilateral Convention to Implement Tax Treaty Related Measures to Prevent Base Erosion and Profit Shifting (MLI) is the most forceful multilateral initiative to coordinate tax regimes on a worldwide basis since the dawn of modern income taxation over a century ago. This book evaluates two radically opposed viewpoints on the convention?a momentous and revolutionary paradigm shift versus a mechanism that merely continues an ongoing flow of limited policy coordination?with detailed investigations that bring to life the hopes and the realities of the current era of multilateral tax cooperation.

Bringing together authors from national jurisdictions across the globe to scrutinize the MLI and its likely future ramifications, the book provides in-depth commentary and analysis in the following sequence:

The legal workings and implications of the MLI might still seem mysterious to those whose daily work is impacted by it, and there is as yet little jurisprudence regarding its legal nature or ultimate effect on the bilateral treaties coming within its scope. For these reasons, this pathbreaking book will be warmly welcomed by in-house counsel and law firms advising cross-border investors and firms; nongovernmental organizations involved in policy analysis and issue advocacy; researchers working on technical areas of international tax law; and lawyers interested in international policymaking, including the creation and diffusion of consensus-based fiscal and related regulatory norms across jurisdictions of differing development levels.