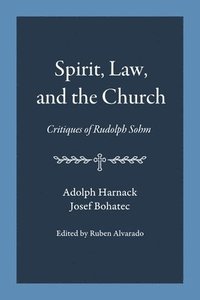 Spirit, Law, and the Church

av Adolph Harnack, Josef Bohatec, Ruben Alvarado
Häftad Engelska, 2019-10-31
133
Köp
Spara som favorit
What is the place of ?organization? in the church? To what degree does the church need to be ?organized?? At bottom, that was the question addressed by the famed Lutheran legal scholar and church historian Rudolph Sohm (1841?1917). His conclusion was radical: organization was anathema to the church as a spiritual body, and was only tolerable as a concession to the necessities of temporal life.

While this conclusion sounds radical, it is actually, in practical terms, the baseline position of the denominational framework as we experience it in our day. Denominationalism treats outward organization as a matter of indifference, so that any number of options are available, all of them equally legitimate. The rationale behind this indifference lies in the notion that each individual Christian is the source of authority in the church, the framework of which depends upon consent and choice. It is not a question of what God says about it, but what man says. For to think otherwise is to impose upon our wills, our choice, and that is not something moderns can tolerate.

Sohm and the moderns meet at the point of departure: the church in terms of outward, external order is the product of man?s decision, not God?s command. The two authors included in this book beg to differ. Adolph Harnack (1851?1930), distinguished church historian, argued that the church developed an organizational structure early on, and it did so in obedience to its Lord and Savior Jesus Christ. Organization and law are indeed spiritual values, not just earthly constructs. Josef Bohatec (1876?1954) similarly argued that John Calvin?s opposition to Lutheran indifference in matters of organization and law was a matter of obedience to the Word of God. Their positions are presented here, in their own words.

The issue is anything but academic. A proper doctrine of the visible church is the prerequisite for a recovery of Christian culture and politics, indeed for the extension of Christ?s kingdom on earth. Indifference in this is in fact supremely dangerous, because it betrays Christ's lordship. The arguments presented, taken together, lead to the inescapable conclusion that Sohm?s concept of the church and of law are crippling to a proper ecclesiology. They provide aid and comfort to the notion that the visible, organized church is the problem, when in fact it is the solution.
Visa hela texten