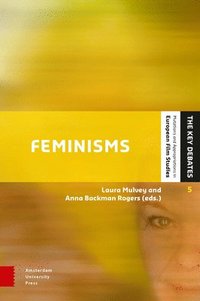 av Laura Mulvey, Anna Backman Rogers
Häftad Engelska, 2015-05-18
829
Köp
Spara som favorit
Finns även som
Visa alla 1 format & utgåvor
This collection brings together an exciting group of established and emerging scholars to consider the history of feminist film theory and new developments in the field and in film culture itself. Opening the field up to urgent questions and covering such topics as new experimental film, the digital image, consumerism, activism, and pornography, Feminisms will be essential reading for scholars of both film and feminism.
Visa hela texten

"Forty years after "Visual Pleasure and Narrative Cinema" Mulvey and Backman Rogers's Feminisms demonstrates the rich, diverse, and lasting legacy of feminist film studies. From female agencies in television series to digitized heroines in film to the aging female star, Feminisms combines compelling analyses of contemporary images of women and their narratives with insightful reflections and interviews on the developments and differentiation in the history, theory, and practice of women and film and in the larger field of media studies. It is not only a pleasure to read but also an indispensable book for generations of emancipated (film and media) scholars to come.." - Patricia Pisters, professor of film studies at the Department of Media Studies, University of Amsterdam " [...] most striking of all, Yfeminist film theoryOE turns out to be, not a relic of the 1970s, nor a notion of the cinema as a singular entity, but rather a wide-ranging exploration of what the cinema has been and what itmight be in the future." - Judith Mayne in Film Quarterly "A welcome, and perhaps necessary, return to feminist debates in film studies after a seeming dormancy in the so-called post-feminist era of the 1990s and 2000s." - Maria Walsh, Moving Image Review & Art Journal MIRAJ

Laura Mulvey is the author of Visual Pleasure and Narrative Cinema. She was professor in film and media theory at Birkbeck College, University of London, and director of the Birbeck Institute for the Moving Image. Anna Backman Rogers is senior lecturer in film studies at Gothenburg University in Sweden.