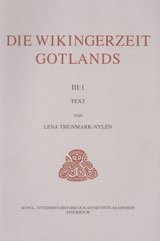 av Lena Thunmark-Nylén
Häftad Tyska, 2006-06-01
431
Köp
Spara som favorit
The Viking Age, Period VIII of the Scandinavian Iron Age, is here divided into four phases (VIII:1-4) for Gotland, and the phases dated c. 800-900, 910-990, 1005-1090, 1110-1200. The material culture of Viking-Age character thus overruns the border between the historical Viking Age and the Middle Ages. The Period-VIII artefacts are systematized into types and subtypes, which are described as to morphology, and assigned to their respective phases VIII:1-4. The morphology of graves, cemeteries and settlements, including trading places and harbours, is detailed. Certain phenomena such as Thing- and cult-places are discussed separately, as is Visby. Dress and weaponry are described from the evidence in inhumations and picture stones. Contacts between Gotland and its surroundings are commented upon under the heading Politics, Trade and Religion, as well as in a chapter on Gotlanders abroad and foreigners on Gotland. Relative chronology is demonstrated in relation to the cemetery at Ire in Hellvi and to the churchyard finds, and means of absolute dating are discussed. A final chapter provides a synthesis of the author's view of Gotland during the period in question.
Visa hela texten