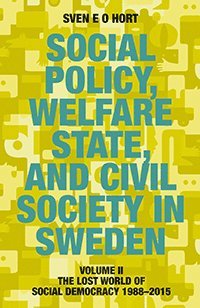 av Sven E O Hort
(1 röst)
Häftad Engelska, 2014-01-31
205
Köp
Spara som favorit
Social Policy, Welfare State, and Civil Society in Sweden I-II gives a comprehensive account of the global invention of the welfare state, from the far north of the West to the global East and Southeast, and from its social policy origins to the most recent challenges from civil society.

This second volume aims at the civil society challenge to the welfare state since 1988, or "the lost world of social democracy". It opens with an overview of the three generations of comparative welfare state research, from Harold Wilensky to Gøsta Esping-Andersen, Theda Skocpol and onwards. Inspired by the work of Norbert Elias, Karl Polanyi, and Stein Rokkan as well as by Benedict Anderson, Tom Nairn and Elinor Ostrom, the civilizing process and embeddedness of the welfare-industrial complex are scrutinized. The author's key concepts are imagined welfare communities, and common pool resources in (civil) society and state. Privatization trends in Sweden - from take-off to bonanza - and domestic resistance to the powers of the day are then lucidly assessed, and the simultaneous deconstruction and reconstruction of a once famous welfare state is elaborated with force and vigour. Finally, the cross-national Scandinavian differences are outlined. The five essays of volume II emphasize the historical relativity of social welfare institutions and argue against all developmental metaphysics.

This work is an updated and enlarged edition in two volumes of Sven Hort's well-known and wide-ranging dissertation Social Policy and Welfare State in Sweden, published under the author's birth name Sven E. Olsson in 1990. The first volume contains the original four essays and covers the formation and evolution of the Swedish welfare state 1884-1988.

Sven E. O. Hort is Professor in Social Welfare at the College of Social Sciences, Seoul National University, Korea. He is an alumnus of Lund University. In Sweden he taught sociology at Linneaus and Södertörn universities. Currently he is the chief editor of the Swedish journal Arkiv. Tidskrift för samhällsanalys and a deputy editor of European Societies. With Stein Kuhnle he is the author of "The Coming of East and South-East Asian Welfare States", Journal of European Social Policy (2000).

"The publication of this book in 1990 marked a turning point in understanding of how the Swedish welfare state should be conceptualized both from a historical and comparative perspective. Its combination of sophisticated theoretical perspectives and in-depth empirical analysis became a model for many later studies of welfare state regimes. Added to the timely new edition is a 'volume II' sequel that updates and deepens the analysis of how the Swedish welfare state has fared during the era of globalization. This new edition is a 'must read' for everyone interested in the history and future of welfare state regimes." - Bo Rothstein, August Röhss Chair in Political Science, University of Gothenburg

In praise of the first edition:

"... takes us beyond simple analyses, emphasizing the deep historical roots of social democracy in Sweden and considering the role of ideas, the organization of politics, and the activities of social classes other than labor in building and securing Swedish social policy. Olsson's book presents a comprehensive overview of the development of the Swedish welfare state and a detailed consideration of several key episodes of welfare-state development." - American Journal of Sociology

"This is a very scholarly and broad ranging analysis of the postwar Swedish welfare state ... which is invaluable for comparative policy analysis." - Critical Social Policy