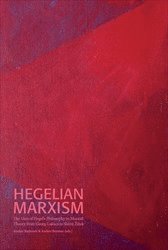 Hegelian Marxism : The Uses of Hegel"s Philosophy in Marxist Theory from Georg Lukács to Slavoj Zizek

av Anders Bartonek, Anders Burman
Häftad Engelska, 2018-10-19
187
Köp
Spara som favorit
Since Georg Lukács and Karl Korsch in the 1920s, Hegelian Marxism has played a prominent role as a radical intellectual tradition in modern political theory. This anthology investigates how these Hegelian Marxists, in different historical, political and intellectual contexts during the last century, have employed Hegel"s philosophy with the aim of developing and renewing Marxist theory.

Besides Lukács and Korsch the volume includes articles dealing with the thoughts of Herbert Marcuse, Theodor W. Adorno, Walter Benjamin, Evald Ilyenkov, Lucio Colletti and Slavoj Zizek. The overall purpose is to investigate if, and the degree to which, these thinkers could be interpreted as Hegelian Marxists, and how they use the Hegelian philosophy to better understand their own current society as well as situate themselves in relation to orthodox forms of Marxism. Taken together, the articles can hopefully contribute to an intensification of discussions about the critical and self-critical philosophy of Marxism today.
Visa hela texten

Anders Bartonek is lecturer at the Philosophy Department of Sdertrn
University, Stockholm. He specializes in German philosophy, mainly the
Critical Theory of the Frankfurt School and German Idealism. He wrote his
dissertation on the concept of non-identity and the negative dialectics of
Theodor W. Adorno (2011). He is also involved in the Swedish translation
of Hegel's 'Elements of the Philosophy of Right'. Anders Burman is professor of Intellectual history at Sdertrn University.
One of his main areas of research is the tradition of Hegelian Marxism. He
has written, edited or co-edited almost thirty books, among them the monograph
Flykten frn Hegel ("The Flight from Hegel") and the anthologies Att
lsa Hegel ("To Read Hegel") and Tysk idealism ("German Idealism"). Sven-Olov Wallenstein is Professor of Philosophy at Sdertrn University.
He specializes in German Idealism and modern European philosophy, with
a particular emphasis on aesthetics and philosophy of art. He is the author
of numerous books on philosophy, contemporary art, and architecture.
Recent publications include 'Madness, Religion, and the Limits of Reason' (ed.
with Jonna Bornemark, 2015), and 'Architecture, Critique, Ideology: Writings
on Architecture and Theory' (2016). He is currently completing the first
Swedish translations of Adorno's 'sthetische Theorie and Negative Dialektik',
as well as monographs on Adorno and Lyotard.

Since 2001, he is editor-in-chief of Site Magazine (www.sitemagazine.net).

Back to Hegel! Georg Lukács, Dialectics, and Hegelian Marxism

Karl Korsch: To Make the Right Marx Visible through Hegel

Herbert Marcuse: No Dialectics, No Critique

The Necessary Fetishism of the Work of Art

The Revisionist Within: Unity and Unilateralism in Hegelian Marxism and Beyond