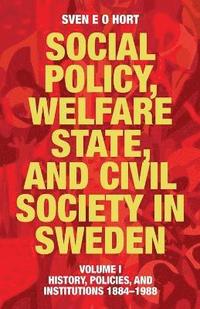 av Sven E O Hort
Häftad Engelska, 2014-01-01
279
Köp
Spara som favorit
Finns även som
Visa alla 1 format & utgåvor
Social Policy, Welfare State, and Civil Society in Sweden I-II gives a comprehensive account of the global invention of the welfare state, from the far north of the West to the global East and Southeast, and from its social policy origins to the most recent challenges from civil society.

This first volume includes four essays, by now minor classics in welfare state literature. "Before Social Democracy: The Early Formation of a Social Policy Discourse in Sweden" set the stage for a research current that shifted from state welfare to welfare mix and civil society. "Working Class Power and the 1946 Pension Reform in Sweden" examined a key thesis in Peter Baldwin's seminal work The Politics of Social Solidarity, and led to a lively polemic among social historians. The third text was first published (as "Sweden") in volume 1 of Peter Flora's magnum opus Growth to Limits: The Western European Welfare States Since World War II. The final essay, "The Dialectics of Decentralization and Privatization", is a path-breaking study of the Swedish welfare state's reconstruction in the 1980s.

The second volume covers the period since 1988 - "the lost world of social democracy" - and recent changes in comparative welfare state research and the Nordic Model.

This work is an updated and enlarged edition in two volumes of Sven Hort's well-known and wide-ranging dissertation Social Policy and Welfare State in Sweden, published under the author's birth name Sven E. Olsson in 1990. This first volume contains the original four essays of the first edition.

"This is an impressive, comprehensive and knowledgeable contribution to the analysis of the early history and long-term development of the Swedish welfare state. Through a prime focus on reform actors at various stages we are persuasively reminded that there was a history before the ascendance of Social Democracy from the early 1930s, that the Social Democrats played a crucial role in the expansionary phase, and that one must go beyond theories of class politics to get a proper understanding of the evolution and characteristics of the modern welfare state." - Stein Kuhnle, Professor in Comparative Politics, Hertie School of Governance and University of Bergen

"The development of the Swedish welfare state is often sketched in fairly simplistic terms. Professor Hort's analysis remains the most penetrating of the complex and fascinating interplay between politics, social forces, and economic development that explains much of the intricacies of the system that eventually emerged." - Gunnar Wetterberg, The Royal Swedish Academy of Sciences

Sven E. O. Hort is Professor in Social Welfare at the College of Social Sciences, Seoul National University, Korea. He is an alumnus of Lund University. In Sweden he taught sociology at Linneaus and Sdertrn universities. Currently he is the chief editor of the Swedish journal Arkiv. Tidskrift fr samhllsanalys and a deputy editor of European Societie...
Visa hela texten