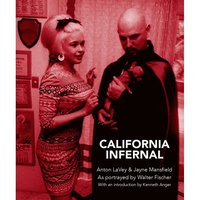 av Kenneth Anger, Carl Abrahamsson, Alf Wahlgren
Inbunden Engelska, 2017-06-18
380
Köp
Spara som favorit
Movie star Jayne Mansfield and notorious Satanist Anton LaVey met in 1966. Both were publicity conscious and made the most of the meetings, which evolved into friendship. Almost always present was German paparazzo Walter Fischer, stationed in Hollywood and catering to image- and scandal-hungry photo magazines all over the world.

Fischer"s unique collection of photos takes us straight into the ritual chamber of the Church of Satan in LaVey"s infamous "black house" in San Francisco, as well as into Mansfield"s Hollywood "pink palace". We also get to follow LaVey on excursions to his friend Forrest "Famous Monsters of Filmland" Ackerman, to Marilyn Monroe"s grave, to TV studios and back to Satanic weddings and Zeena's baptism at the Church of Satan HQ.

These were wild and narcissistic times in America. Few understood the power of media exposure better than Jayne Mansfield and Anton LaVey. Captured alone or together by master paparazzo Walter Fischer, this devilishly handsome couple made headlines that still resonate today.