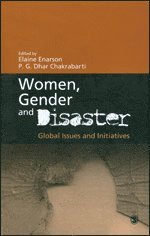 av Elaine Enarson
Häftad Engelska, 2015-01-27
306
Köp
Spara som favorit
Finns även som
Visa alla 1 format & utgåvor
Women, Gender and Disaster: Global Issues and Initiatives examines gender within the context of disaster risk management. It argues for gender mainstreaming as an effective strategy towards achieving disaster risk reduction and mitigating post-disaster gender disparity. Highlighting that gender inequalities pervade all aspects of life, it analyses the failure to implement inclusive and gender-sensitive approaches to relief and rehabilitation work. While examining positive strategies for change, the collection focuses on women's knowledge, capabilities, leadership and experience in community resource management. The authors emphasize that these strengths in women, which are required for building resilience to hazards and disasters, are frequently overlooked.

This timely book will be extremely useful to policy makers and professionals active in the field of disaster management and to academics and students in gender studies, social work, environmental studies and development studies.
Visa hela texten

This is a good book for students trying to understand this developing field. Policy makers and researchers will be able to implement the frameworks and tools highlighted in this book. It is meant to be used as a resource for future implementation of gender-sensitive disaster risk management. The tools and framework will provide a good starting point for any policy maker. Every part of this book could have been a separate book, but the editor does a good job of weaving the extensive literature into a systematic and good read.

The book not only highlights challenges that must be overcome but also provides recommendations for achieving equal participation of women in decision-making and approaches for integrating a gender perspective into disaster risk reduction strategies. It brings to light the fact that unless relief workers and officials acknowledge their vulnerable status and plan relief efforts accordingly, women will continue to be disproportionately affected by natural disasters.

This book would be good for students of psychology and organizations working with women at grassroots level to take up lessons for future course of directions.

Women, Gender and Disaster provides a comprehensive overview of the role gender plays in various disaster situations…[The book] brings together cross-cultural and grassroots perspectives on both response and reduction, examining what is being done now and what could be done in the future…The book gives important case studies and examples for those working in the disaster management field, policy makers, academics and students alike.

Elaine Enarson is an American disaster sociologist currently working independently in Lyons, Colorado. Her personal experience in Hurricane Andrew sparked extensive work on gender-based vulnerability and capacity, writing from applied and theoretical perspectives on womens human rights, livelihoods, safety, housing, community roles, political mobilisation, family lives, and disaster quilting as well as gender and extreme heat, evacuation and disaster recovery. She has developed a number of gender and disaster training packages for practitioners and a manual for Canadian grass-roots womens groups on emergency preparedness. A founding member of the Gender and Disaster Network (GDN), Elaine was also the lead course developer of a FEMA course on social vulnerability and initiated a grass-roots risk assessment project with women in the Caribbean as well as the online Gender and Disaster Sourcebook. Currently she consults with UN agencies and teaches part time in her areas of interest. Elaine co-edited The Gendered Terrain of Disaster: Through Womens Eyes (1998) and Women and Katrina: The Gender Dimensions of Disaster Recovery (forthcoming) and is developing a monograph on these topics in US contexts.

P G Dhar Chakrabarti has been both a researcher and a practitioner of development policies and programmes on a wide range of issues. Starting his career as a Lecturer in Calcutta University, he joined the Indian Administrative Service in 1980 and worked on various assignments at local, provincial, national and international levels. During his tenure as Head of Womens Development Wing in the Ministry of Human Resource Development, he was involved with many new initiatives like the Gender Budget, Womens Component Plan and the National Policy on Womens Empowerment. Presently, he is heading both the National Institute of Disaster Management which is the nodal institute of Government of India for research, documentation, training and capacity building on disaster management; and the SAARC Disaster Management Centre which is a regional organisation of the eight South Asian countries. He was nominated by the Secretary General of the United Nations to serve as a Member of the Advisory Group of Central Emergency Response Fund (CERF) of the United Nations. He further worked as a Member of the Expert Group of the UNISDR on Gender and Disaster. He is the editor of two journals he foundedDisaster and Development and Journal of South Asian Disaster Studies. Widely travelled, he has authored a number of books and contributed papers in journals published from different countries.