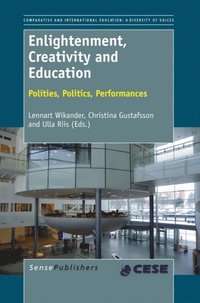 av Lennart Wikander, Christina Gustafsson, Ulla Riis
E-bok (PDF - DRM), Engelska, 2012-12-06
429
Ladda ned
Spara som favorit
Laddas ned direkt
Läs i vår app för iPhone, iPad och Android
Enlightenment, Creativity and Education: polities, politics, performances presents someoutcomes of the 24th Conference of the Comparative Education Society in Europe (CESE),held in Uppsala, in summer 2010. Bringing together studies related to knowledge andeducational policies, the volume deals with the role of knowledge, globalisation and newtrends what have an effect of identities and policies. Changes in societies have changedthe rhetoric concerning the position and function of education. What - in comparativeperspective - are the historical forces and sociological and economic structures whichare infl uencing our ideas and assumptions about identity and wisdom and the futureof polities and economies? So the conference asked: what are the contemporary andemergent nature of polities, and the politics of the future - and who says so? Thispublication is structured along three themes for the purpose of giving illustrationsto some of the questions asked. The themes are I. Comparative Education - The roleof Knowledge and Educational Research, II. Globalisation and New Trends, III. NewKnowledge - Identities - Policies. Lennart Wikander is a Senior Lecturer in the Department of Education at UppsalaUniversity. His fi eld is Higher Education including its relations to the labour market. Educational policies in a comparative perspective have also been a major part of hislecturing and research. He is President of NOCIES (Nordic Comparative and InternationalEducation Society). He is also member of the CESE Executive Committee. Christina Gustafsson is Professor of Education at Uppsala University and Director ofResearch in Educational Science at the University of Gvle. She started as a classroomresearcher, and spent some years working on evaluation as a research practice. For thepast fi fteen years, she has been oriented towards higher education research, especiallyresearch related to teacher training and newly qualifi ed teachers. Ulla Riis is Professor of Education at Uppsala University and Director of the programmeStudies in Higher Education (SHE) at the Department of Education. She also haspublications in Science Education and Computer Education in school as curriculumissues. Her latest report deals with the outcomes of a reform of the promotion systemfor Swedish university professors.
Visa hela texten