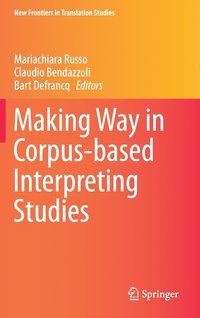 av Mariachiara Russo, Claudio Bendazzoli, Bart Defrancq
Inbunden Engelska, 2017-11-03
1507
Köp
Spara som favorit
Finns även som
Visa alla 1 format & utgåvor
This book presents a collection of state-of-the-art work in corpus-based interpreting studies, highlighting international research on the properties of interpreted speech, based on naturalistic interpreting data. Interpreting research has long been hampered by the lack of naturalistic data that would allow researchers to make empirically valid generalizations about interpreting. The researchers who present their work here have played a pioneering role in the compilation of interpreting data and in the exploitation of that data. The collection focuses on both of these aspects, including a detailed overview of interpreting corpora, a collective paper on the way forward in corpus compilation and several studies on interpreted speech in diverse language pairs and interpreter-mediated settings, based on existing corpora.
Visa hela texten

"The book has demonstrated that researchers have successfully made way in CIS, putting the fast-developing research field on a right track that may finally enable CIS researchers to discover the undiscoverable and to use corpus-based findings for practical ends. Undoubtedly, after Straniero Sergio and Falbo (2012), the current volume represents another authoritative reference on CIS, and is therefore a must read for interpreting students, trainers, researchers and other stakeholders interested in CIS." (Chao Han, FORUM International Journal of Interpretation, Vol. 18 (1), 2020) "The volume presents a Compilation of state-of-the-art research in CIS over the past decade and is therefore an essential resource for both established researchers and postgraduate candidates. ... the main purpose of this book is to showcase some of the larger existing corpora, and most authors rise to this task." (Ella Wehrmeyer, Interpreting, Vol. 21 (1), 2019)