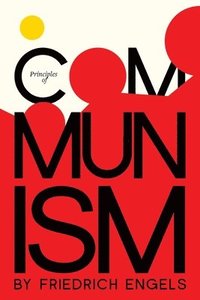 At the June 1847 Congress of the League of the Just, which was also the founding conference of the Communist League, it was decided to issue a draft "confession of faith" to be submitted for discussion to the sections of the League. The document which has now come to light is almost certainly this draft. Comparison of the two documents shows that Principles of Communism is a revised edition of this earlier draft. In Principles of Communism, Engels left three questions unanswered, in two cases with the notation "unchanged" (bleibt); this clearly refers to the answers provided in the earlier draft.

The new draft for the programme was worked out by Engels on the instructions of the leading body of the Paris circle of the Communist League. The instructions were decided on after Engels' sharp criticism at the committee meeting, on October 22, 1847, of the draft programme drawn up by the "true socialist" Moses Hess, which was then rejected.

Still considering Principles of Communism as a preliminary draft, Engels expressed the view, in a letter to Marx dated November 23-24 1847, that it would be best to drop the old catechistic form and draw up a programme in the form of a manifesto.

At the second congress of the Communist League (November 29-December 8, 1847) Marx and Engels defended the fundamental scientific principles of communism and were trusted with drafting a programme in the form of a manifesto of the Communist Party. In writing the manifesto the founders of Marxism made use of the propositions enunciated in Principles of Communism.

Engels uses the term Manufaktur, and its derivatives, which have been translated "manufacture", "manufacturing", etc., Engels used this word literally, to indicate production by hand, not factory production for which Engels uses "big industry". Manufaktur differs from handicraft (guild production in mediaeval towns), in that the latter was carried out by independent artisans. Manufacktur is carried out by homeworkers working for merchant capitalists, or by groups of craftspeople working together in large workshops owned by capitalists. It is therefore a transitional mode of production, between guild (handicraft) and modern (capitalist) forms of production.