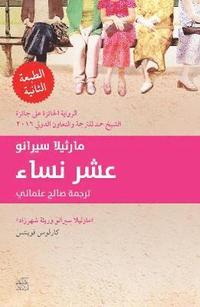 av Marcela Serrano
Häftad Arabiska, 2013-10-24
118
Köp
Spara som favorit
Text in Arabic. Nine disparate women, unknown to each other, are brought together by a tenth, a therapist, to share their stories. Regardless of their social standing, age, or profession, each woman is burdened by fear, insecurity, and loneliness. Some face a past they cannot leave behind; others, a present that is untenable, or a future that looms ominously. They find peace in one another and discover that courage overcomes all.
Visa hela texten

A novelist and the child of writers, Chilean writer Marcela Serrano (born 1951) originally dedicated herself to the plastic arts, and it was not until 1991 that she published her first novel, We Loved So Much, which proved a sensation that year and won Chile's major literary prize. Her subsequent novels, among which The Hotel of the Sad Women and Our Lady of Loneliness, met with the same success. Marcela Serrano is one of the most outstanding Latin American writers working today and one of the most read in Spain and Italy.